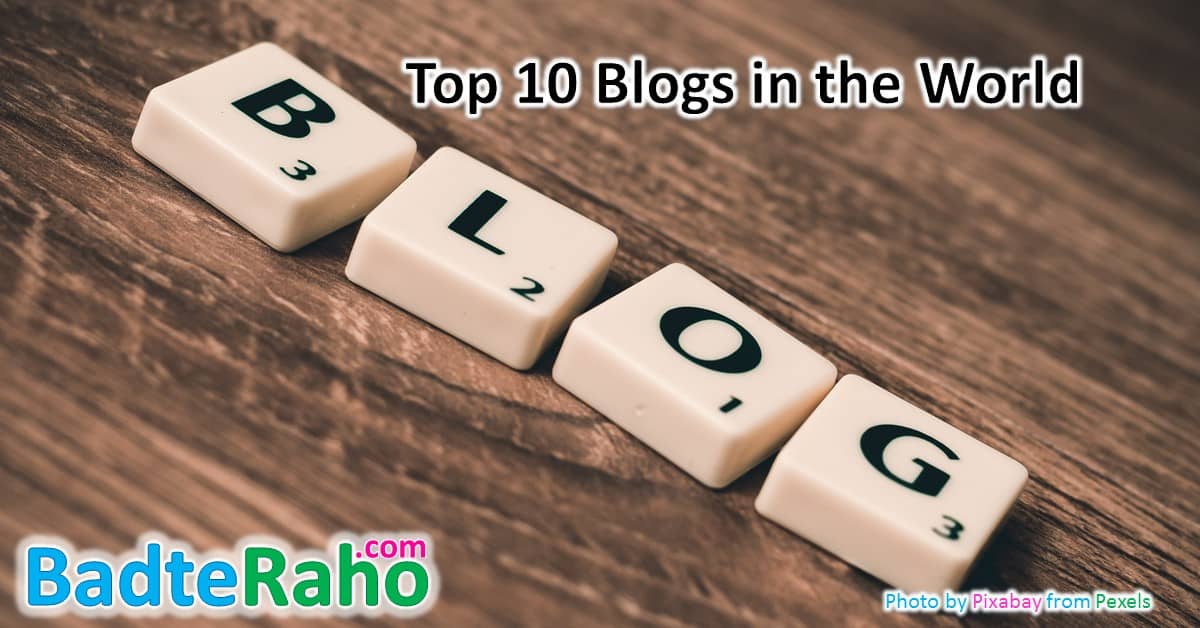 In this post, we will give a brief introduction to the Top 10 Earning Blogs in the World. But, what are blogs? A simple website or something else. And how people are earning from these blogs?

Thousands of terabytes of digitalized information is transferring from one location to another location around the globe. But Do you know how this is happening? Just because thousands of websites are hosting on the internet every day with lots of information. Many of them we use to learn something, to get an update like gadget reviews and news, learning and enhancing new skills, etc. In most of the websites, we got all this information free of cost.

How do Blogs Earn?

But have you ever think, why they are providing free information on the web? How they are managing the running cost of that website or blog?

Simple, All these are earning from advertisements, marketing a product, sponsoring through banners on their website, etc. But how much they can earn? There are so many people who are earning an outstanding income with their website/blog. Their monthly income is more than executive-level and director-level employees.

Initially, you will get a very little amount and it will not enough to keep you motivated with low income from your website or blog. But it is a platform where you get paid repeatedly for your work. You don’t need to do the same work again to get paid.

In blogging, you have to write informative content that is useful to other people who read your blog. The more readers you will have, the more income you will earn.

I am also inspired by these bloggers and decided to start my own blog. I Hope, you will also get inspiration from these bloggers.

So, here are the top 10 earning blogs in the world.

Arriana Huffington’s blog is the most popular blog in the world and ranked #1 in blogging. It was launched by Huffington in 2005. She started writing about the liberal view of life and politics. Soon this blog became popular among online readers.

In 2011, Huffington sold this blog by her namesake to AOL for the amount of $315 Million and being kept on as Editor in Chief.

Today’s name knows as HuffPost, and it earns money from sponsored advertising, googles Adsense, and other digital ads across its variety of channels. HuffingtonPost is also operating its Indian version with a .in domain in India. It is a clever investment for AOL for owning it because as of today this blog valued over $1 Billion and most successful blog of its kind.

This is a multi-national technology blog network and covers daily news of gadgets and consumer electronics on daily basis. This blog currently operates a total of ten blogs out o ten, four written in English, and six international versions with the independent editorial staff.

It is another most popular blog founded by Peter Rojas who also founded Gizmodo around the same time.

This blog conveys reviews, news, and advice on technology and consumer electronics. It is also acquired by AOL in 2005 and since then operated by AOL.

This blog constantly providing the best advice on every type of gadget in the market.

One of the world’s most successful blogs about search engine optimization. It is founded by Rand Fishkin and today formerly know as SEOMoz. This blog shared information about the research and ideas of the world’s first SEO experts to its online community.

It was started as a family-run design business, later on, morphed into a search engine optimization shop. But it was the blog that helped gain them a huge audience and international appeal.

The site makes its money mainly from a membership area. This features professional tools and services for the avid search engine marketer looking to gain saturation, reach, and visibility in the online space.

This blog was started by Pete Cashmore in 2005 from his home in Scotland. The site grew with Cashmore’s dedication to producing excellent content. On a consistent basis covering many topics like technology, gadgets, culture, entertainment, science, social good, etc.

In 2009, Time Magazine referred to as Mashable one amongst the twenty-five best blogs in the world.

Since then, the blog has gained more readers rapidly and reach, with a significant focus on social media. In 2015, it has over 6,000,000 Twitter followers and over 3,2000,000 fans on Facebook. It is earning mainly through advertisements in various different formats.

Originally started by Michael Arrington in 2005, this is a massively successful blog that primarily covers news in the area of the technology industry.

It reports on the business of technology, tech news, analysis of rising trends in technology, and profiling of new tech businesses and products.

In 2010, this blog is acquired by AOL for approximately $25 Million.

Today, it is also known for its Disrupt conferences that host an event called Startup Battlefield. At its conferences where startups sign up to pitch their business ideas on the stage in front of ventures, capital investors, media, and other alternative interested parties.

It was started by Brian Clark, which provides some of the most useful online marketing advice in the world. with just $1,000 in seed cash, he launched CopyBlogger and teaching people how to create killer online content.

Today, CopyBlogger is known as Rainmaker Digital with more than 200,000 unique customers and growing by providing useful content, smart copywriting, and exceptional products and services.

Copyblogger brings you original, relevant content every week about what’s trending right now in online content marketing. And we’re not too humble to mention it’s the foremost fashionable content promoting and writing web log in the world. You should read this blog because you will get lots of information here for free.

It is a controversial gossip website run by Mario Armando Lavandeira Jr. Previously it was known as PageSixSixSix.com. Later on, it has moved to PerezHilton.com and famous for posting and covering controversial gossips about celebrities. This blog is also famous for tabloid photographs over which he has added his own doodles and captions.

Lavanderia graduated from NYU in 1996 on a scholarship, and later had dreams to become an actor. At the same time, he started his blog. He was also an aspiring actor in his college days.

Lavanderia’s acting career didn’t get success, but his blogging did well. Today, he earns his financial gain primarily through advertisements from a range of sponsors that seem across the location. Today, Lavanderia himself continues to make appearances on television as a celebrity gossip commentator and has reached a certain level and fame on his own.

It was launched in 2002, focusing on subjects like design and technology, while also paying tribute to numerous areas of science and even politics.

Gizmodo was originally started by Peter Rojas who also founded Engadget. This blog gained popularity quickly and through partnerships with a variety of international firms. The blog quickly launched translated versions of its content across Europe in languages like French, German, Spanish, and even Portuguese.

The main earning source of this blog is from advertisements. On its homepage, which is its most valuable space, hardly you will find any ads, but you will find ads that often repeat. For example, a large ad on the top will display along with ads for the same company on the side as you scroll. Often repeating with each scroll and finished with a large ad on the bottom of the home page. And in other pages, there will be different ads, likely based on historical traffic.

Founded by Vitaly Friedman, dedicated to teaching web design and web development field those who are looking to enhance and learn any of these effective skills.

The blog is hosting a web development conference since 2012 in different cities across the world and is sponsoring by some of the biggest names in the technology industry. The site is also providing a place for the developers to find a job and the same for companies who are looking for developers around the world.

The site earns its income primarily from a membership area where users can sign up to consume a large number of tutorials from its educational content. This site is also offering their tutorials in the form of PDF and Hard Cover book with a little amount.

One of the most famous websites providing outstanding tutorials who are looking to learn to code. Any developer will love this site’s tutorials. This site is founded by Collis Ta’eed in 2006.

This site is delivering outstanding tutorials and content to designers and developers from across the entire world for quite some time now. Millions of digital assets and creative assets you can find here. People can also buy services for installing themes and getting support for their development work.

Today, they offer a hub of useful content and a very great amount marketplace where 2,000,000 active buyers are searching for site templates and useful paid tutorials that they offer as part of their platform. They earn their income primarily through a membership area and commissions from sales of digital goods likes website themes, elements on their platform. I have also bought this blog theme from the Envato market and I love this template.

So, these are the top-earning blogs in the world with the highest amount in its category. The earning you have seen is estimated, it may vary from time to time. There may be other bloggers who are earning a good income and working as a full-time blogger. If you want me to add more people to this list, you can also drop your comments in the comment box and we will publish the top 50 bloggers list including them.